As sunset draws near,
I look up and see a tree
Beginning to bud 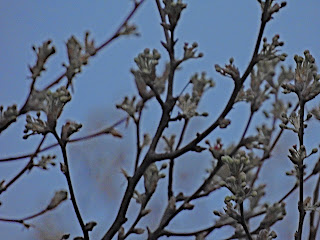 Posted by Don Coffin at 6:23 PM No comments:

I finished reading Mark Kurlansky’s Ready for a Brand New Beat, his attempt to convince us (and, perhaps,, himself)of the cultural and political importance of a pop-rock song, “Dancing in the Street.  Composed by a team of Motown songwriters (Marvin Gays, Willian “Mickey” Stevenson, and Ivy Jo Hunter) and initially released by Martha Reeves and the Vandellas.  Clocking in at 2:46, it peaked at #4 on the pop charts and was #17 on the 1964 year-end rankings according to Billboard.  Looking at the 1964 year-end list, I think there is a case to be made for it (although I personally would pick The Drifters’ “Under the Boardwalk,” which Billboard has at #20.  (It’s clearly a better song than any of the top 100 from 1963, although Sam Cooke’s “It’s Another Saturday Night” is terrific.  I’d put two songs from 1965 ahead of it-The Rolling Stones, “Satisfaction (#3 for the year) and Bob Dylan’s “Like a Rolling Stone” (#41). Still, “Dancing in the Street” is a remarkable song and deserves the praise it gets.
Billboard Year-End Hot 100 singles of 1964 - Wikipedia
Martha & The Vandellas "Dancing in the Streets" - YouTube

But Kurlansky wants to do much more than assert the musical merits of “Dancing in the Street.”  His thesis is that “Dancing…” is much more than a great rock song.  It is, he argues, a song whose origins (consciously or not) come out of the political and civic unrest that marked the summer of 1964 and that it continued to resonate in the summers that follow.  An important part of this part of the story is white flight generally and the very real destruction of Detroit as a major American city.  He also, I think, wants to make a case for the importance of Motown (and by extension Berry Gordy) in changing the musical world and providing the soundtrack to the social and political changes that became clear in 1964 and shaped a narrative that helped define the ‘60s.

Kurlansky doesn’t treat this population changes in much detail, although he does sketch the outlines.

The Motown story is actually pretty amazing on its own, without any of the political weight that Kurlansky adds to it.  The incredible blossoming of talent, and the ability of that talent to break out of being only a niche of the music business—the breakthrough of Black music and performers into the pop charts is an important story, and he tells it well.  And telling it requires making it clear that Gordy made household names out of an extraordinary group of talented men and women.  Here, he makes it clear than Gordy did not treat his talent very well, leaving some of the most talented basically in poverty while he got rich (at least for a while).

But Kurlansky wants to do much more than tell the story of Motown and the story of a song.  He wants to convince us that the song was a catalyst for the rise of a political movement—a galvanizing force behind at least part of the civil rights movement.  Especially of the Freedom Rides and the struggle to force states in the south to allow Blacks to register and vote.  The outlines of the events themselves are pretty well handled, and, if that part of the struggle obviously continues (with 30or more states now trying to make voter registration and actual voting harder—and not just in the south).  I don’t think he makes his case.  The argument is that “Dancing in the Street” was heard as (whether it was intended to be heard this way is a much harder case) a call to activism, even to violence.  That “dancing in the street” was not—was not thought to be by political activists in 1964 and later to be a nice dance song, but was, indeed, a call to revolution.  He cites a few activists who claim (if only in hindsight) to see it that way.  But it reads as a stretch, not as an evident truth.

The strangest part of the book is his discussion of the huge number of recorded versions of the song (including, somewhat weirdly, David Bowie and Mick Jagger doing a duet).  I think he’s trying to make a claim for the continued vitality of the song.  And it has been covered and recorded over and over again.  Including a number of weird attempts (the Mamas and Papas?  I don’t recommend it.  Van Halen?  Don’t recommend that either.  The Grateful Dead?).  I can’t find even an estimate of the number of recorded versions, but it seems to be in the hundreds.

I was absorbed by the book, even as I argued with it frequently.  “Dancing in the Street” is a seminal achievement in rock literature.  Bu in the end it’s just a great song.  It did not change the world.  It did not even, really, change the music business.  It probably did not make the singers and players rich.  But it was an important moment for Motown, making the label ubiquitous and helping to make Berry Gordy rich.

Posted by Don Coffin at 6:06 PM No comments: