As I began reading The Crooked Hinge, I had conflicting impressions—first, that I was reading it for the first time, and, second, that I had read it and knew how it turned out.  Those impressions persisted throughout my reading, until the very end.  Partly because the book’s title rang no bells for me at all.  (I checked on the “Stop, You’re Killing Me website, to see whether the book had been published at some time under another title—but  it had not.

Let me begin here by saying that The Crooked Hinge is not exactly a locked-room mystery; it is an “impossible crime mystery.  The murder is witnessed by several of the others involved.  But no one actually sees how the murder was committed.  This is one of the reasons I thought I had already read it—I knew both how and who immediately.

But I’m getting ahead of myself.

The story is set in the late 1930s, and involves as principals, two men who, as young boys, had been sent to America.  In 1914.  On the Titanic.  One was John Fairleigh, the younger son of Sir Dudley Fairleigh; he was sent to (they hoped) reform his ways.  The other was a boy of about the same age, Patrick Gore, the child of a poor family.  The ship, of course, sank, the boys survived.  And, years later, after his older brother died, John Farleigh returned to England, inherited the property, and set about being the typical country squire—including marrying the young woman whom he had known.  Then, a man who had grown up under the name Patrick Gore arrives, claiming to be the true John Farleigh, and seeks to take possession of the estate.  (To keep things from becoming too tangled, I will refer to the man who did inherit Farleigh and the interloper Gore.)

Both men have engaged solicitors.  And they are to meet to discuss the situation.  And, as it turns out, for one to be identified as the real John Fairleigh.  The identification is to be provided by Kennett Murray, Fairleigh’s tutor as a young boy, who has, in addition to that knowledge, a set of fingerprints, taken of young Fairleigh 20+ years before.

Death intervenes.  As I was (re?)reading, I expected the victim to me Murray (of course).  But it was Fairleigh, who was in the middle of a sort of maze (the shrubbery being about waist high) who dies, with no one within sight, by (apparently) slashing his throat with an old knife.  I appears, of course, to be suicide (which would clear up the identity issue).  But not everyone is convinced, including a police inspector (from London, who’s there because of another death, clearly a murder) and Dr. Gideon Fell.  (I want to pause, and give thanks to the designer of the cover of this edition of the book; I now know what Dr. Fell’s “shovel hat” looks like.)

We get that far quite quickly.  The problem is that, as more information becomes available, the case for suicide becomes weaker and the case for murder becomes stronger.  And the issue of which of the men was actually Sir John Fairleigh now takes on a somewhat different role.

But Dr. Fell does unravel the mystery.  And it was, in fact, the solution that I “remembered” from my unclear memory of having once, long ago, read the book.  Carr was a master of creating situation that make it seem impossible for anyone, but especially for the murderer, to have committed the murder, and this is one of the better scenarios.  If complex misdirection mysteries appeal to you, you can hardly do better than JDC.  And this is a very good example of what he can do.

Posted by Don Coffin at 6:24 PM No comments:

Erik Larson, The Splendid and the Vile

Erik Larson, The Splendid and the Vile: A Saga of Churchill, Family, and Defiance During the Blitz
Copyright © Erik Larson 2020
Crown Publishers
ISBN (hardcover) 978-0-385-3871-3

Erik Larson has a deserved reputation for writing excellent works of non-fiction (In the Garden of Beasts; The Devil in the White City among others) and The Splendid and the Vile may be his best yet.  He takes us on an almost day-by-day trip through the period from the collapse of the British and French armies in 1940 to the U.S. entry into the war in 1941.  His focus is on England—where the people, from the famous (Churchill) to ordinary citizens of London and other cities are challenged by the destruction and death (29,000 dead, another 29,000 injured) and destruction (Coventry basically destroyed; thousands of homes and businesses destroyed in cities throughout England) resulting from the bomber raids that struck the country continually.  But in emphasizing the effects on England, he does not neglect the German side of the equation, relying heavily on Göbbles’ diary entries for insights into how Germany saw the war.

What makes The Splendid and the Vile so striking is the wealth of material available, mostly from diaries and letters, that allows us to follow the events as the appeared to the people experiencing them, not as they might be recalled years later.  But there is a cost to this reliance, albeit a minor one: the voices are mostly those of the powerful and the rich.  There was an organized effort by the government (and I am blanking on the agency) to acquire information from the population in general.  Whichever agency it was recruited a fairly large number of people to participate in the “Mass Observation” diary” project (which actually began in 1938); the diarists were often prompted to respond to specific events.  But the story is mostly that of the rich, the powerful, and the well-connected.

And Larson tells the story very well.  For the 500 pages of the text, my interest did not wane; despite knowing how the story ended, the level of detail, and the mix from very personal stories (falling into and out of love; dances and parties) to high strategy kept me engaged throughout.

That’s not to say that it is perfect.  I’ve mentioned the almost inevitable concentration on the upper classes.  Most of the deaths, most of the injuries, and (probably) a disproportionate share of the suffering, were not among the elite.  And, although we know that Larson is not trying to write a history of the war, he’s trying to capture the period in which the outcome was truly unknown, the ending seemed to me to a disappointment.  But one thing that I truly did moss was and attempt to provide any visuals to accompany the text.  I realize that including photos with the text would have added much to the length and expense of producing the book, but there is (these days) an option:  Create a website with a collection of photos and link to that through a url in the book.

Whatever reservations I have, however, The Splendid and the Vile is truly a splendid book.

It's been a while since I've done a copycat phtoblogging post, spinning off  Chris Bertram's posts at Crooked Timber (here's a link to the photo I'm copycatting:
https://www.flickr.com/photos/chrisbertram/50237676901)

My photo was taken during a photography workshop in West Virginia in 2017. 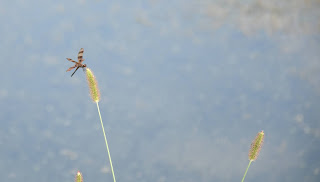 After a disastrous mission in occupied France, Billy Boyle (a former Boston police officer (briefly, before the war, working in homicide and a distant cousin of Eisenhower (for whom he now works as an investigator) has landed in the Saint Albans Asylum (formerly a “lunatic asylum) for treatment and recovery from the aftermath of that mission.  During that mission, his close friend, with whom he has worked since the war began, Baron Piotr Kazimierz (Kaz) has had a serious, potentially life-threatening heart seizure.  And things at St. Albans are not what they seem.  But what things are, we learn only gradually.

One thing they are is fatal:

I stood still, unable to decide which way to go.

Which is why I saw the two men up in the clock tower…They were nothing but blurs of brown uniforms. Heads and shoulders barely visible above the crenellated stonework...

Boyle is certain of what he saw.  But was it real, or was it a stress-induced vision?  There is a corpse—a man named Holland is dead on the ground.  Was it murder (the other man in the tower), suicide, accident?  And when he is asked to look into whether the death was murder, suicide, or accidental, he first has to regain his own (mental) balance.  And that’s not easy.  Fortunately, one of the psychiatrists on staff (Dr. Robinson) manages, using a treatment I’d never heard of, to help Boyle regain his equilibrium  And, to complicate things, Kaz’s condition is very serious; the medical staff thinks that the heart damage he has sustained will be permanent, and he will live out his life as a semi-invalid.  But an American doctor has developed what is still an experimental surgical procedure that might work.

The cast is large, including members of the Home Guard (there as a security detail); patients (male and female); staff members; and folks from British and American intelligence groups (notably the British SOE).  As Boyle’s investigation proceeds, somewhat stealthily, as he is a patient, and is not allowed to be out and around at night, we meet some of the other residents, including a mad scientist, two women (one of whom, much like Holland cannot, or, at least, does not speak).  The situation worsens when a British intelligence officer is (clearly) murdered, and another staff member, also dies, also murdered.  And post-card sized drawings start showing up.

As an added complication, the woman Boyle, Diana Seaton, and Kaz’s sister, Angelika, are both being held in the Ravensbrück concentration camp.  Which is close to the factory producing the new V2 German missiles are being produced (we get a very harrowing description of what those missiles can do later on).  And (at least in this universe) Himmler is seeking to repatriate some 100 prisoners (to Sweden), in the hope that, should Germany lose the war, he might be treated leniently.  This, of course, must be kept a secret.

Benn’s knowledge of the war, and of the people and environment in which it is being waged is immense.  His setting, his people, and their actions (the Home Guards, for example, although minor characters are very much alive) all ring true.  And, while the scene in which the murders are brought home seemed to me to resolve a bit weakly, the ending of the book moved me to tears.  In this 15th book in the series, Benn shows that he’s on top of his game.  And I’m looking forward to what I hope are many more tales to come.

Posted by Don Coffin at 6:22 PM No comments: