This is the fourth in the series, and (to date) the second best.  (The first--The Herring Seller's Apprentice--seems to me slightly better.)  Following the events in The Herring in the Library, crime writer Ethelred Tressider decides to take a Nile cruise (for research purposes...but he also intended to have company).  Things don't work out exactly as planned, as his expected company does not accompany him--but his agent, Elsie Thirkettle, does.

Ethelred is cornered by another passender on the boat, a Mr. Purbright, who alleges himself to be an agent of M.I.6, and, mistaking Ethelred (one of whose pen names is Peter Fielding) for Paul Fielder, a best-selling thriller writer' he's seeking help in dealing with possible terrorists and needs some backup.  The other passengers on the boat are the usual strangely assorted lot, none of whom may be quite what they seem to be.  (Among the passengers is Herbie Proctor, a somewhat sleazy and incompetent PI there to protect a client he has never met.  We have encountered Herbie before.)

Not too surprisingly, death intrudes, and Ethelred and Elsie (more or less independently) try to determine what's going on.  For the reader, identifying the murderer should be fairly simple...but figuring out the motive is somewhat less simple.

Be on the lookout for a mention of a famous mystery author (other than Agatha Christie, whose name pops up quite often) and one of that author's books.  Also, treat yourself to Ethelred's responses to a set of interview requests (questions to be answered by email) from various newspapers in England.

A very good entry in what is, so far, a very satisfying series.
Posted by Don Coffin at 11:42 AM No comments:

L. C. Tyler, The Herring-Seller's Apprentice
Felony and Mayhem 2009
(Original publication, Macmillan New Writing 2007)
ISBN 978-1-934609-23-1
I'm not sure why I had not heard of these books before, nor do I remember exactly what called them to my attention.  But I am extraordinarily glad to have made the acquaintance of Ethelred Tressider (author of three series of novels under three names) and Elsie Thirkettle (his agent).
Ethelred, on returning from a holiday in France, is asked by the police in his west-of-England town to identify a corpse, strangled, whom they suspect may be his wife.  After a rather circuitous path, we reach the resolution of the murder and of several, shall we say, difficulties in Ethelred's life.  Elsie leaps at the chance to assist in the solution of the murder (and to narrate parts of the story).  One of the aspects of the book I thought I would not care for is the attempts Ethelred makes at starting the new Inspector Fairfax book, but they work beautifully (most especially the last one).
The resolution is entirely fair-play and (for me) not exactly a surprise, but it is well-done and emotionally satisfying.  The only thing I can't figure out is how we will from where Book 1 (this one) in the series ends and Book 2 (of 4 so far, Ten Little Herrings; book 5 is due out next month) begins.  But I'll find out, and quite soon--maybe tonight.  The Herring-Seller's Apprentice is a gem.  (And all the titles, so far, are plays on the titles of other mysteries, not very hard to figure out.)
Posted by Don Coffin at 2:14 PM No comments:

I  bought a new camera today, a Nikon DSLR, with a potential image size of 24 megapixels. This image, of the fence out back, is a reduced image size of an image that was 12 mp--it's only 2.3 mp. I wasn't sure it would post to Blogger, so this is sort of a trial run at how large an image I can post here. 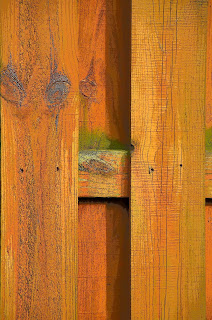 Posted by Don Coffin at 4:34 PM No comments: