Chris Bertram has a lovely picture of the Adriatic.  I have a picture of an Italian lake. 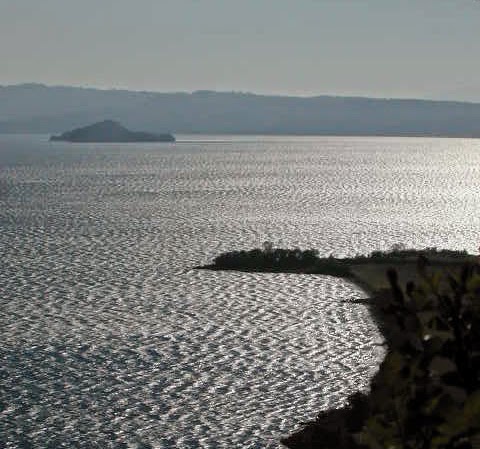 Posted by Don Coffin at 7:01 AM No comments:

Mostly, when I read fiction, I read mysteries.  And my favorite mystery author is Rex Stout(1886-1975), who created Nero Wolfe and Archie Goodwin.  For reasons we need not go into, I'm re-reading the Wolfe books (in chronological order) and recently finished Not Quite Dead Enough, which consists of two novellas ("Not Quite Dead Enough" and "Booby Trap"); my concern here is with "Booby Trap."

And, if you have not read it, and plan to, stop now, because I am going to completely ruin the story, by outlining what happens, and what I think Stout got wrong.


It's set in 1943, and Goodwin is in the army, serving in military intelligence (he is Major Goodwin), and Wolfe is providing consulting investigative services (and forgoing any fee). The story focuses on a military intelligence investigation of possible theft of proprietary business information.  One MI officer--Captain Cross--has died (from falling or being propelled out a hotel window).  And a U.S. Senator, John Bell Shattuck, has received an anonymous letter:

Dear sir:  I address this to you because I understand that your investigating committee is authorized to inquire into matters of this sort.  As you know, in the emergency of the war, the Army is being entrusted with the secrets of various industrial processes.  This practice is probably justified in the circumstances, but it is being criminally abused,  Some of the secrets, without patent or copyright protection, are being betrayed to those who intend to engage in post-war competition of the industries involved.  Values amounting to tens of millions of dollars are being stolen from their rightful owners.


Proof will be hard to get because of the difficulty of showing intent to defraud until it is put into practice after the war.  I give you ne details, but an honest and rigorous investigation will certainly disclose them.  And I suggest a starting point:  the death of Captain Albert Cross of Military Intelligence.  He is supposed to have jumped, or fallen by accident from the twelfth floor of the Bascombe Hotel in New York day before yesterday.  Did ho?  What sort of inquiry had he been assigned to by  his superior officers?  What had he found out?  You might start there.

Subsequently,  one of the MI officers--Col. Harold Ryder--dies when a new type of hand grenade explodes in his office.

So.  Much later, after discovering that Shattuck is involved in the theft of industrial secrets and is at least presumptively involved in both deaths.  Wolfe, attempting to induce him to commit suicide, says, among other things, this:

It was she [Sgt. Dorothy Bruce, detailed to work in the New York office] who typed the anonymous letter to you--incidentally, you shouldn't have let it scare you like that.  No one had the slightest suspicion of you.  The same letter was sent to some thirty people [with, presumably minor differences, because most of them would not be chairing an investigative committee]--key people in legislative and administrative positions.  They were merely fishing.  It was different with Col. Ryder.  There was no proof, but he was under observation, and that's why Miss Bruce was assigned to his office from Washington...


Now, this is where I have always been brought up short.  What had Shattuck done to indicate that anything had scared him?  Having received an anonymous letter, he took it to the relevant people in the military, to bring it to their attention.  (He could, also, have gone to the FBI.)  His alternative, presumably, would have been to initiate his own investigation, leading, again presumably, to committee hearings, which would have inevitably have become public.  My interpretation of his actions is that what he did was actually the responsible thing to do, not an indication of any sort of fear.  (Incidentally, there is nothing else in the story, as I read it, that indicates any personal concern by Shattuck about the letter or about any potential investigation of it.

So what does Wolfe have?  Shattuck's reaction to a situation Wolfe had arranged. And I admit that the reaction is fairly convincing.  But there's nothing approaching evidence, let alone proof.  As Wolfe continues his talk with Shattuck, we says the following:

A crook is not always a fool.  As you know, Mr. Shattuck, there are men in high places in public life, even as high as yours, who are venal, dishonest and betrayers of trust, and who yet will die peacefully in their beds, surrounded with tokens of respect, their chief regret being that they will be unable to read the glowing obituaries the following day.  You might have been one of them.  From the tremendous backlog of credit for services performed which you were piling up among wealthy and influential persons, by these crooked operations you were supervising and protecting from attack, you might even have succeeded in reaching the limit of your ambitions.


But you had bad luck.  You encountered me.  I have two things.  First, I have ingenuity.  I used it today, with the result that you are here with me now.  Second, I have pertinacity.  I have decided that the simplest way out of this business is for you to die.  I am counting on you to agree with me.  If you don't, if you try to fight it out, try to go back to life, you're lost.  There is not now sufficient evidence to convict you of the murder of Colonel Ryder.  Perhaps there never will be, but there will be enough to indict you and put you on trial.  I'll see to that.  If you are acquitted, I shall only have begun.  I shall never stop.  There is the murder of Captain Cross.  There are all the hidden transactions and convolutions of your traffic in the industrial secrets entrusted to our Army to help fight the war.


Now that I know who you are and know where to look, how long do you think it will take me to get enough to impeach you, to drag you into court, condemn you?  A week?  A month?  A year?  What about your associates, when they see the lightning about to strike and smash you?  Colonel Ryder will never testify against you, but there are others.  How about them, Mr. Shattuck?  Can you trust them further than you could trust your old friend Ryder when we get to them and they are ready to break?  You can't kill them all, you know.


This is, frankly, weak.  And, Stout knew it.  Later, he has Wolfe say to General Carpenter (the head of MI), who suggests that they might have broken Shattuck and gotten him to talk.  Wolfe then says this:

If he had had real stuff in him, if he had stuck it out and fought it out, we would have got nowhere.  Convict him of murder?  Nonsense.  As for the rest, the battalions of wealth, legal talent and political power that would have lined up behind him--He could have thumbed his nose at us...But he had annoyed me.  He had challenged me...I simply couldn't afford to spend the next three years, or five or ten, attending to Mr. Shattuck, or trying to.


It reads well, and Stout knew how to make Wolfe sound impressive.  But in this case, there's nothing behind the sound.  And, so, the end is disappointing.  Justice has been served.  But narrative coherence has been sacrificed.

Posted by Don Coffin at 4:56 PM No comments: