Chris Sorenson, a minor bureaucrat in a minor British bureaucracy, wonders whether the world exists outside of his consciousness.  (We have scenes interspersed with Descartes.)  In Chris's world, his parents and younger brother died in a crash some 20 years before.  His girl friend Victoria's father dies, leaving behind a strange, hidden past.  My favorite part of the book is Descartes trying to decide between "Dubito ergo sum" and "Cogito ergo sum."  I do love the idea that "I doubt, therefore I exist."  This is not a happy book and it does not have a happy ending, but it's hard to put down.

But it brought something back for me...On December 24, 1980, I was in a fairly serious car crash, which resulted in a broken hip and a 7-day stay in the hospital.  For several years after that (the frequency of this diminished over time), I was occasionally afraid to fall asleep, because I was afraid that what I thought was reality was simply a dream I was having while in a coma.  And if I fell asleep in the dream, I would not wake up.  I did not really need--or want--to be reminded of that.
Posted by Don Coffin at 11:54 AM No comments:

The second and last Louis "Lobo" Blacke book.  Quinn Booker, Blacke's one-time biographer and now his assistant in the newspaper business (and I the business of finishing some hang-overs from Blacke's days as a lawman), and Blacke have to deal with the fatal consequences of the arrival of Dr. Theophrastus Herkimer in town.  In addition, one of the last men Blacke put in jail (and whom Booker modeled a character on in one of his westerns) has broken out of jail and is headed for the town.  DeAndrea structures the story well, and the characters are all very well drawn (and mostly likeable).  I thought the first of these two books was excellent, and this one is considerably better.  DeAndrea died (at the age of 44) shortly before this one was published, and we will never know how the series would have developed.  He wrote several other books, of which the 8 Matt Cobb books, set in NYC in the television business are probably the best known (and themselves worth the time to read).  (Black and Booker were inspired by Rex Stout's characters, Nero Wolfe and Archie Goodwin.)
Posted by Don Coffin at 6:30 PM 1 comment:

The return of Sunday copycat photoblogging

Once again, Chris Bertram has a lovely photo over at Crooked Timber.  Here's my brasserie photo, taken in Paris in 2000. 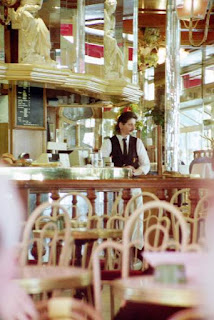 William DeAndrea, Written in Fire
A Walker Mystery (1995)
Out of print, but available from used book sellers.


The first (of 2)  Louis "Lobo" Blacke mysteries.  Quinn Booker, from a distinguished New York family, who has made a living as a journalist and writer of "westerns" in the late 19th century, has scored a best seller with his biography of legendary lawman "Lobo" Blacke (now paralyzed from the waist down, having been shot in the back), receives a telegram offering him a job on Blacke's newspaper.  Blacke, of course, has an ulterior, but laudable, motive.  Booker arrives in Montana and is immediately faced with a challenge (as one might say) to his manhood by a quartet of drunks, of whom he bests 2.  Fairly soon, 2  murders--an internationally famous photographer and an associate of Blacke's--occur (which would have been 3, except Booker was lucky).  The portrait of Montana in the late 19th century is vivid and seems accurate, and Blacke (and Booker) make a nice team, unraveling the mystery.  My only complaint is that there's only one more book about them (The Fatal Elixir).  (Blacke and Booker are fairly obviously based on Nero Wolfe and Archie Goodwin.)
✩ ✩ ✩ ✩1/2
Posted by Don Coffin at 8:34 PM No comments:

Twelve people have been invited to the country home of Lord Aveling for an October weekend--an actress, a journalist, a painter (who is painting Aveling's daughter), a wealthy sausage manufacturer and his wife and daughter, a widowed femme fatale (F.F.), a genial cricketeer, a member of Parliament whose career is at a crisis point, a mystery novelist, and a mysterious couple whom no one really knows.  The thirteenth guest injured his ankle as he leapt from the train, and was brought to the party by the F.F.  Naturally, things do not go well.  There are various levels of intrigue, but, of course, the crisis is murder--and not one of the guests, but an apparently unknown outsider.  And things don't end there.  This is truly a classic English country house mystery, from the oddly assorted list of guests, to the dependable police inspector, to the quite convoluted solutions.  I've read another of Farjeon's books (Mystery in White, also part of the reprint series), which has many characteristics in common with this one.  However, Thirteen Guests has a more interesting set of characters and a solution that seems more organic and less contrived.  ✩✩✩✩
Posted by Don Coffin at 3:42 PM No comments:

The first in what appears to be a projected series.  The protagonist/narrator is John Grey, who lives in a small Sussex village in the late 1600s, and has completed his studies at Cambridge.  He's ambivalent about moving to London and entering the chambers of a barrister, with the intention of becoming one.  And one night, as he's trying to get home (drunk), a mysterious horseman asks him for directions to the tavern, and throws him a shilling.  When he awakes and continues toward his home he finds a corpse, its throat cut.  What follows is an intrigue centering on Cromwell (who is aging and ill) and Charles Stuart, in exile in Bruges.  Who is a Royalist and who is a Republican?  (Grey's position, at least, is clear.)  Grey investigates the first murder, and subsequent events, albeit not very successfully (as presented, he is not the sharpest sword In the armory).  My favorite character name in the book is Ifnot Davies; you will have to read the book to find out the source of his name.  Well-written and the times are well-evoked.  If this is going to be a series, it's a good beginning.  ☆ ☆ ☆ ☆
Posted by Don Coffin at 9:25 AM No comments:

A couple of "golden age" mysteries

Both Rue Morgue Press and the British Library Crime Classics (published in the U.S. by Poisoned Pen Press) have extensive lists of reprints of "golden age" mysteries.  I recently finished one book published by Rue Morgue and one by Poisoned Pen.

The Beagle sisters (Amanda and Lutie) inherit a PI agency from their brother Ezekiel, and, with and their cousin (Martha Meecham), move to New York to take it over.  Their first case, is, of course, murder.  A headless body is found in the bed in the apartment of a young woman, by the wealthy young man who loves her.  Amanda and Lutie decide to investigate (and Martha narrates the story).  This was a fun book.  But the solution--which requires 22 pages of explanation by Lutie--is incredibly complicated.  The number of moving parts to the murder plot is more than anyone could possibly expect to actually work.  Still, assuming Our Second Murder is this good, I'm sorry Chanslor wrote only the two mysteries.  (I also have to say, I suspect that Richard and Frances Lockridge knew these books, because the Beagle sisters seen to be a possible inspiration for Pam North's maiden aunts from Cleveland, the Misses Whitsett, in Murder Comes First.)  ☆☆☆☆

Superintendent Meredith investigates the case of the murder of John Rother, who owned a farm and lime kiln with his brother William.  It appears that John and William's wife Janet may have been involved.  Human bones are found in the lime kilns, but Meredith's investigation seems to be going nowhere--until he discovers that John had, for the 18 months prior to his death, spent most weekends elsewhere.  An investigation of that leads to a house owned  by one Jeremy Reed, who shows up only on weekends.  Janet decamps (and disappears).  William commits suicide--or is murdered.  As with Our First Murder, the murderer's plan is way too complicated to work outside of a book.  But the story is well told (save for way too many excursions into local dialect speech).  Bude had a 20+ reasonably successful career (1936-1956) as a crime writer.  (Incidentally, the setting is near Findon, which is also the home town of Ethelred Tessider, L.C. Tyler's mystery writer and reluctant sleuth.)  ☆☆☆☆

The Return of Copycat Photoblogging

Over at Crooked Timber, Chris Bertram  has a beautiful photograph of the church of Sant’Andrea della Valle.

I have a slightly lower-key image of the interior of the synagogue in the Tuscan hill town of Pitigliano (taken in 2002): 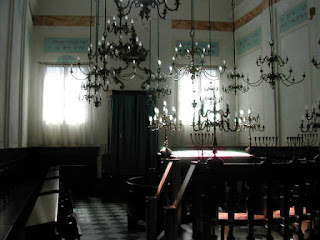 Posted by Don Coffin at 8:39 AM No comments: