Billy Boyle, who has just been promoted to detective in the Boston PD, finds  himself in the Army.  Family connections get him into OCS and an appointment on the staff of his Uncle Ike (whose wife is a relation of the Boyles).  His role is to serve as a special investigator as needed.  And he is almost immediately needed, as a member of the Norwegian government in exile dies at a conference to finalize plans for an invasion of Norway (a joint operation of the US, the UK, and the Norwegians).  Also, there's apparently a German spy around.  Billy is uncertain of his ability to investigate the matter But  with the assistance of a Polish Captain (and Baron) Piort Augustus Kazimierz--Kaz--and an English WREN (Daphne Seaton), he begins to make progress.  The settings all seem realistic, and the evocation of the atmosphere in England in 1942 is extraordinarily well done.  Billy's progress toward a solution is also well-handled, and plausible.  And the ending is just flat out brilliant.  As a debut novel in a series (of, to date, 10 books), this sets the bar very high for the succeeding books.
Posted by Don Coffin at 6:35 PM No comments:

Erle Stanley Gardner, The Case of the Deadly Toy (1959)
Available as an ebook

I ran across a mention of this book earlier today, and realized that there was a Perry Mason book I had not read.  So I acquired it.  Fortunately, most of the Mason books are relatively short, and quick reads; this one took me maybe 2.5 hours.

A young woman shows up on a Saturday, hoping to find Mason in his office.  She has flown down from San Francisco to see the ex-wife of her ex-fiancé, but has decided she needs legal help.  (Her ex-fiancé is, she believes, behind a series of threatening notes, printed on a child's printing press (which, as it turns out, weighs 85 pounds, so it's not your normal child's toy) that have been mailed from LA.  Furthermore, her ex-fiancé has assaulted the man she started seeing.

And here's a surprise (or two)--her ex-fiancé turns up in LA, found dead in a country club parking lot.  And her new beau shows up in LA (he disappears from the book right after he appears, which I thought was odd.)

Meanwhile, her ex​'s ex-wife is trying to hold onto custody of her son.  The son, who is 7, has developed a habit of playing with his step-father's .22 Cold Woodsman piston (although, we hope, only when it is unloaded).

Reading the brief bio of Gardner at the end of the book, I discovered that his life (1889-1970) and his Perry Mason series (1933-1973--2 of these were posthumous) coincided fairly closely with the life (1886-1975) and Nero Wolfe series (1934-1974) of Rex Stout.  In my opinion, there's no question who was the better author (that'd be Stout) and who was the more interesting character (Archie Goodwin, actually, but also Wolfe).  But the parallel time line just struck me as interesting.
Posted by Don Coffin at 7:46 PM 2 comments:

Bob Dylan wrote a song, probably in late 1962, probably partly in response to the Cuban missile crisis. That song is “Masters of War,” and here are the lyrics:

And I hope that you die
And your death’ll come soon
I will follow your casket
In the pale afternoon
And I’ll watch while you’re lowered
Down to your deathbed
And I’ll stand o’er your grave
’Til I’m sure that you’re dead
http://www.bobdylan.com/us/songs#ixzz3rQW5uHX2

The rage there has a history, and it has not gone away or ended. But the end of that rage is simply death. That is the frightening thing about the events today in France, about this song, about the world in which we live. The end of rage is not peace, not justice. It is simply death. Look at the final verse. There’s no hope there. There is only rage and death.

There are times when I wish I had a belief in a god of peace and justice. But all the gods seem to be gods of war and hatred and death. And so I do not believe. I hope, but hope comes increasingly more difficult. And I do not hope for more deaths, but I’m afraid a lot of people out there will agree with Dylan:

And I hope that you die
And your death’ll come soon
I will follow your casket
In the pale afternoon
And I’ll watch while you’re lowered
Down to your deathbed
And I’ll stand o’er your grave
’Til I’m sure that you’re dead
Posted by Don Coffin at 6:10 PM No comments:

Homage to the Great Nero 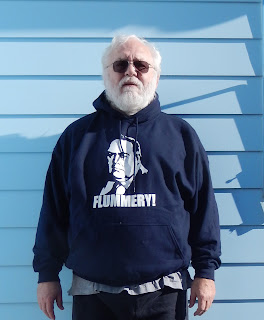