E. C.R Lorac, Bats In The Belfry: A London Mystery, an entry in the British Crime Classics Series


Martin Edwards, who writes the introductions to the books in this series of reprints, sometimes (it seems to me) overstates the virtues both of the particular book and of the author.  [The one “Sgt. Cuff” book, by Gil North (Sgt. Cuff Stands Firm), I read is a good example of that.]  In this case, he writes:  “…this particular novel seems to have aroused little attention, either on first publication, or subsequently, despite its quality,” citing both the strengths of the plot and the fine descriptions of tits settings (mostly in London).  If anything, I think he undersells the virtues of Bats In The Belfry.


The cast of characters, while not extensive—only 7 or 8 have more than walk-on roles—is excellently depicted.  All of them are distinct personalities and have distinct voices.  These are members or, or close acquaintances of the novelist Bruce Attletton and his wife, the acclaimed actress Sybilla Attleton  The Scotland Yard detective, Chief Inspector Macdonald , is a low key, thorough, diligent sleuth, showing  both intelligence and imagination in his investigation.  The story opens with the aftermath of a funeral, in which Bruce’s ward (it’s about the only real cliché in the book—the ward whose life is controlled by her guardian) Elizabeth Leigh mentions the “murder party” she’s to attend, at which everyone has to concoct a plan to dispose of the corpse of the person you have just murdered—in a way that keeps you from suspicion.


And we go on from there,


Bruce has plans to go to Paris for a week or so, and one of the circle of friends in the book, Neil Rockingham, is making a separate trip there as well.  And Bruce disappears.


We discover than a shady character named Debrette has been trying to blackmail Bruce.  Debrette has rented an old church that is about to be torn down as a sculptor’s studio.  Rockingham and Robert Grenville (journalist and suitor of Elizabeth) attempt to track Debrette down.  But he disappears.


And if anything, the complexities increase from here.  Lorac sets this all up with a deft touch, and Inspector Macdonald’s efforts to bring clarity—and an arrest—are well described and seem, in sum, quite reasonable.  By the end, I had little idea who the murderer was, but Macdonald’s explanation ties everything together nicely.  (One minor quibble I had was with the book’s title…we get the belfry alright, but not—unless I missed them—the bats.)


I’ll be on the lookout by more Lorac books (who was, in her private life Edith Caroline Rivette life).
Posted by Don Coffin at 6:32 PM No comments:

The 23rd Re-run of Copycat Photoblogging

Chris Bertram has a lovely shot here.  My shot is a pair of houses in a small town in France (taken in 2000). 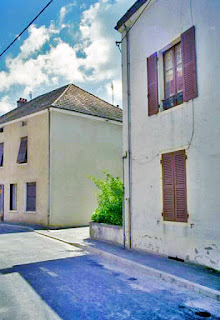 Posted by Don Coffin at 7:00 AM No comments:


Three novellas: "Eeny, Meeny, Murder, Mo;" "Death of a Demon; "Counterfeit for Murder."  Three of the stronger of the short mysteries, and Hattie Annis, Wolfe's client in "Counterfeit for Murder" (which closes the book) is a magnificent achievement.  One thing I liked especially was, when she was asked what she would like for luncheon, she responds:  "How about some lamb kidneys bourguignonne?"  As if, of course lamb kidneys would be available...and, of course they are.  A truly nice bit involves the efforts of a U.S. Treasury agent and Inspector Cramer to gain possession of $10,000 in brand new (in every sense of the word) $20s. The identity of the murderer is not hard to figure out, though.  [Stout had used the surname “Annis” in a previous novella, “Poison ala Carte” (1960), continuing a practice of re-using names.]


In "Eeny, Meeny, Murder, Mo," the first entry in the book and least of these three, Wolfe gets a spot of barbecue sauce on his tie at lunch, and leaves it on his desk when he leaves for the afternoon orchid session.  While he's up on the roof, a legal secretary at a prestigious law firm arrives with an interesting legal problem--but it involves a divorce case.  Wolfe, on principal, refuses to handle anything dealing with divorce.  But Archie undertakes to talk him into it, and ascends to the greenhouse.  While he's upstairs, the potential client is murdered--strangled with the tie.  There is one aspect of the plot that strikes me as extraordinarily unlikely.


And in "Death of a Demon," a PR "expert" is murdered and an identical gun winds up in his wife's possession (and, through her, Wolfe's).  The twists with the guns provides the main interest in the plot; the evidence Wolfe can provide about the murderer is somewhat speculative.  But Archie shines as a tough-guy detective.


As a whole, this is vintage Stout and vintage Wolfe.  Archie’s narrative voice is one of the finest things I know of in mystery fiction.  Well worth the money and the time.
Posted by Don Coffin at 4:50 PM No comments:

Some notes on The Post (directed by Steven Spielberg and starring Meryl Streep and Tom Hanks).

God, did that take me back.  Having lived through the events nearly 47 years ago, and, now, living through another set of events that seem at least as strange as did those days in the spring of 1971.

It occurred to me then, and the thought recurs today, that the attempt to keep the Pentagon Papers (as they came to be called--then, they were just the papers) was not really directed at protecting any particular political or military secrets from the North Vietnamese, or the Viet Kong, or the Soviet Union, or China.  They all knew exactly how the war was going, exactly what the U.S. was doing.  The only secrets being kept were from the American people--from you and me.  Because making what our government had been doing in our name would have--and did--lead to outrage.

As it is, though, then (and now) it occurs that Nixon could have released the whole thing and blamed it on his predecessors, especially Kennedy and Johnson.  It could easily have become another "the Democrats have lost," just as, in the late 1940s/early 1950s, it became "the Democrats lost China."  (A meme, if you will, that Nixon happily embraced at the time.  He could have played it as a shock, as something that could not have happened, and would not have happened, if there'd only been a Republican--him, of course--in the White House.)  Interestingly, the Wikipedia entry says "President Nixon at first planned to do nothing about publication of the study since it embarrassed the Johnson and Kennedy administrations rather than his. But Henry Kissinger convinced the president that not opposing the publication set a negative precedent for future secrets."  (https://en.wikipedia.org/wiki/Pentagon_Papers#The_Nixon_administration's_restraint_of_the_media)

Also what's interesting to recall is how rapidly the Supreme Court moved.  The initial injunction to restrain publication was granted on June 14, 1971—one day after the first publication in the New York Times.  The Times appealed, the appellate court vacated the restraining order.  And a separate district court refused to enjoin the Washington Post’s publication.  The Justice Department appealed directly to the Supreme Court, and the Court heard arguments on June 26.  Four days later, on a 6-3 vote, the Court found for the newspapers.  Justice Hugo Black wrote the decision, which read, in part:


“Only a free and unrestrained press can effectively expose deception in government. And paramount among the responsibilities of a free press is the duty to prevent any part of the government from deceiving the people and sending them off to distant lands to die of foreign fevers and foreign shot and shell.”

The movie does a nice job of dramatizing these events, and Streep and Hanks do well in their roles.  Two smaller roles, however, were (I think) crucial to the success of the movie—Matthew Rhys as Daniel Ellsberg and Bruce Greenwood as Robert McNamara.  I also found myself wondering where they found the linotype machines and letterpress presses and crew to operate them.

But it seems clear that we have found ourselves again in a situation in which we have a president whose primary interest is not the best interests of our country, but rather to gather and use power for himself.  In that respect, The Post is an extraordinary cautionary lesson in the abuse of power.  But this time there’s an entire political party prepared to be complicit in that abuse of power.  We can only hope that the institutions of our country prove strong enough, again, to withstand the attacks.

[As a personal aside.  I was in grad school at the time and had spent a good part of the spring 1971 semester working my way through a pile of things dealing with game theory.  One of which was Daniel Ellsberg’s doctoral dissertation (Risk, Ambiguity and Decision—I had to look it up), and man, that was a struggle.  Here’s Wikipedia on Ellsberg’s Paradox: