Not that this is a family mystery.  Rather, it’s that the principal (and recurring, in subsequent books) characters feel very much like a family.  Our protagonists consist of four young barristers in London (in alphabetical order), Michael Cantrip, Selena Jardine, Julia Larwood, Desmond Ragwort, and Timothy Shepherd; and Hilary Tamar, an Oxford Don and legal scholar.Our tale commences as Hilary arrives in London to pursue his researches into causas in English law and Julia departs for a vacation in Venice (she has taken with her a copy of England’s tax code with her, hoping (well…) that she shall find some time to work on a brief she must master.  (Henceforth, I will adopt the choice made by the author, to refer to these characters as Cantrip, Selena, Julia, Ragwort, and Timothy, as they, and our narrator, Hillary, do throughout the book.)

Julia, who is a beautiful young woman (and is in search of a somewhat less than celibate holiday), is thought by her colleagues to be (outside of her legal skills) to be somewhat in need of a keeper.  But, as Selena explains, she has done everything possible to get her to the airport and off to Italy, where she will be part of a group of Art Lovers on a conducted tour.  What could go wrong?  Besides, Selena has enjoined her to write daily of the events of her trip, and she has done so.  From this point, a fair amount of the book consists of Selena reading aloud Julia’s letters to the rest of the group.  (Timothy does not hear much of this, as he must himself head off to Venice to deal with the inheritance and consequent tax problems of Richard Tiverton.  Julia, I should add, has some serious tax problems of her own to deal with.

Well, a good deal, as the group discovers when they receive a telephone call from Cantrip, who is absent for the moment, reading the copy of a paper (not a newspaper) called The Scuttle, to protect it from libel suits.  While there, he discovers, from a Telex that has arrived in the newsroom, that Julia Larwood has been detained for questioning in a murder.  The victim is one of the touring Art Lovers, Ned, who had become Julia’s target for non-celibate activities in Venice (he is described as tal, slender, and beautiful).

So here we are.  Julia is in Venice, detained by the police.  Timothy is en route to Venice to deal with his client’s tax issues (and to assist Julia), Selena is, periodically, reading one of Julia’s letters to the group.  Postal service between Venice and Italy, being what it is, leads to a significant lag between the events Julia describes in her letters and Selena’s receipt of them.

Hillary turns out to be out armchair detective, and by listening carefully to the letters they receive from Julia (and, later, from Timothy), he reaches some conclusions.  These will require the assistance of another of the Art Lovers and some surveillance, in London, of another.  Using, Hillary tells the barristers (and us) uses his undoubted (?) skill in reading and interpreting obscure legal texts, to reach a conclusion.  And that conclusion turns out to be right.

Parts of the tale are extremely funny, and Caudwell’s portrayal of her cast is masterful.  She succeeds in giving each character a unique voice—useful, because the story it told largely either from the letters written by Julia and Timothy.  But it is, murder, after all, and the motive for and means of carrying out the murder leave no doubt that this is not, in the end, a comedy.  It is, in fact, a tragedy, and the lives lost in it are enough to leave me, at the end, feeling the tragedy, and the losses of those concerned, quite deeply.

Posted by Don Coffin at 6:16 PM No comments:

In October 2002, I took this photo of an Italian Communist Party demonstration about to get underway in Rome. 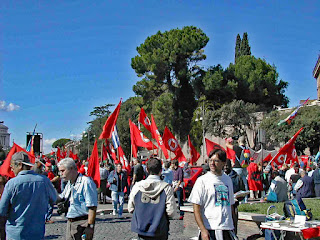 Posted by Don Coffin at 5:34 PM No comments:


The Devouring is the 12th entry in the excellent series of World War II mysteries/thrillers by James R. Benn, and it is a fine addition to the series.  Following their previous assignment (in The Blue Madonna), Boyle and Kaz, his friend, and companion throughout these books (the Baron Pytor Kazimeirski, the sole surviving member of a wealthy Polish family), have to enter Switzerland (somewhat illegally) to assist Allen Dulles in an effort to prevent funds lodged in Swiss banks from being used to support Germany (and to prevent those funds from being used by high-ranking Nazis from escaping with their wealth after the war).


On their way out of France, they encounter Lasho, a Sinti (more or less a Gipsy clan), who has found killing as many Germans as possible to be his only reasons for continuing to live.  They persuade him to escape with them to Switzerland, and he becomes integral to their mission.


As usual, Benn nails the details of the situation in Switzerland at that point in the war (mid-1944; his Afterword provides a good guide).)  Among other things, his depiction of a Swiss detention facility is shocking, and accurate.  And the general “neutral,” but effectively pro-German attitude of much of the Swiss government and population adds depth.  Also as usual, he incorporated real people (used, of course, fictionally—Allen Dulles, and Moe Berg, to name two) into the narrative, and has other characters based on others involved during this time.


While there is a murder investigation into which Billy and Kaz are drawn, the book focuses on one particular effort to obtain a huge amount of money (Swiss francs) and gold.  And there were huge deposits of both in Swiss banks, in numbered (and secret) accounts.  [This aspect of the story reminded me that in Len Deighton’s Funeral in Berlin (1964), the action revolves around an effort to recover the funds, still held in a Swiss bank nearly 20 years after the war’s end, that belonged to a Jewish family.]  Both in fiction and in fact, the issue of those deposits was a very contentious issue for decades.


Benn handles his material wonderfully well, and he has not only created memorable continuing characters, he also populates his stories with rogues and angels and rogue angels as well as anyone whose works I’m familiar with.  Here, he keeps the tension high and the action brisk.  And he raises the possibility, near the end, just the possibility, of an outcome that will change the life of one of his characters.

The Wages of Blackmail (re-posting)

The Wages of Blackmail


How much would a painting by Vincent van Gogh have sold for in the early 1950s?  (This question arises because, in “The Last Witness,” a novella originally in The American Magazine (May, 1955) and reprinted in Three Witnesses (Viking Books, 1955), one of the switchboard operators (Alice Hart) at Bagby Answers, Inc. owns a painting by van Gogh.  Here is the passage in which the Van Gogh is introduced and described and discussed (pp. 18-20 of the Bantam edition of 1994)


Her room was a surprise.  First, it was big, much bigger than the one in front with the switchboard.  Second, I am not Bernard Berenson, but I have noticed things here and there, and the framed splash of red and yellow and blue above the mantel was not only a real van Gogh, it was bigger and better than the one Lily Rowan had.  I saw Wolfe spotting it as he lowered himself onto a chair actually big enough for him, and I pulled one around to make a group facing the couch Miss Hart dropped onto[1]


He shook his head.  “I’m the inquisitor, Miss Hart, not you.”  He aimed a thumb at the van Gogh.  “Where did you get that picture?


She looked at it, and back at him.  “That’s none of your business.”


“It certainly isn’t.  But here’s the situation.  You have of course been questioned by the police and the District Attorney’s office, but they were restrained by their assumption that Leonard Ashe was the culprit.  Since I reject that assumption and must find another in its stead, there can be no limit to my impertinence with you and others who may be involved.  Take you and that picture.  If you refuse to say where you got it, or if your answer doesn’t satisfy me, I’ll put a man on it, a competent man, and he’ll find out.  You can’t escape being badgered, madam; the question is whether you suffer it here and now, by me, of face a prolonged inquiry among your friends and associates by meddlesome men.  If you prefer the latter, don’t waste time with me; I’ll go and tackle one of the others.”


She was tossing up again.  From her look at him it seemed just as well that he had his bodyguard along.  She tried stalling:  “What does it matter where I got that picture?”


“Probably it doesn’t.  Probably nothing about you matters.  But the picture is a treasure and this is an odd address for it.  Do you own it?”


“Are the contents of this room yours?”


“Yes.  I like things—well, this is my extravagance, my only one.”


“How long have you been with this firm?”


She was on a tight rein.  “Eighty dollars a week.”


“Not enough for your extravagance.  An inheritance?  Alimony?  Other income?”


“I have never married.  I had some savings, and I wanted—I wanted these things.  If you save for fifteen years, you have a right to something.”


(Subsequently (p. 68) we learn that Helen Weltz had received about $15,000[2] in excess of her salary during her three years of employment.)


My best estimate of the price at which such a painting might have been purchased is derived from the sale price of the painting “Irises,” which sold at auction in 1987 for $53.9 million.
O. Chanel, in “Prices and Returns on Paintings:  An Exercise on How to Price the Priceless” (Geneva Papers on Risk and Insurance Theory, V. 19, No. 7, 1994, p. 8), describes this as a “real return” to the previous owner of 12.5% (who had acquired the painting in 1948).  Between 1948 and 1987, the CPI in the US rose by a factor of about 4.7.  Applying that, and a real return of 12.5%, we can calculate the “Irises” must have been purchased for about $120,000 in 1948 (this ignores any insurance or other costs of ownership).  Now, “Irises” is, and has long been, regarded as one of the major masterpieces, so we should expect the painting in question in “The Last Witness” to have been less valuable than that.  Nonetheless, a purchase price in the early 1950s between $60,000 and $80,000 seems plausible.  Assume a large and good van Gogh painting (after all, it’s larger and better than Lily Rowan’s) might have been available for even half my estimate, and Wolfe’s conclusions that is a “treasure” in an “odd place” is accurate.


All of which means that the blackmail racket being run by Clyde Bagby and Guy Unger  must have been quite lucrative.  In addition to the $5,000+ per year being paid to their employees [that’s $20,000[3] per year for the Rhinelander office, and more for the other three (older and presumably larger) offices in the Gramercy, Plaza, and Trafalgar exchanges (p. 2)], Bagby and Unger were presumably retaining an even larger share for themselves.  [The Rhinelander office had four boards with room for 60 lines each ((p. 3).]  At a guess, the operation had to have been pulling in something on the order of at least, and probably more than, $200,000 to $300,000[4] per year.  While all of this seems possible, if not necessarily plausible; this amounts to a very extensive blackmail operation, and one of which no law enforcement agency had, apparently, received any indication.  Maybe blackmail is a plausible career…until Nero Wolfe gets involved.

[1] This must be a big room, big enough to contain a bed, a couch, at least two chairs, presumably a chest of drawers or two, and a fireplace.